“Rock of Ages” is a jukebox musical built around classic rock songs of the 1980s (in particular those of the decade’s glam metal bands), curated together to fit its narrative about young people coming to LA to achieve their dreams. It’s an era and thus a show of big bands with big hair, playing big guitar solos. And so Beenleigh Theatre Group plays the story out to the classic rock anthems of Twisted Sister, Styx, REO Speedwagon, Whitesnake, Foreigner and alike.

It is 1987 in the city build on rock and roll. Along Los Angeles’ famous Sunset Strip, a fictional seedy bar, celebrates rock ‘n’ roll debauchery as the lifestyle of dreamers. Busboy and aspiring rock star from South Detroit, Drew (Dylan Hodge) just wants to rock, but every musical needs a love story so enter innocent, straight off the bus from small-town Kansas Sherrie (Jaime O’Donoghue). Of course Drew has been waiting for a girl like her, but before a budding romance can begin, immediately smitten, she engages in a bathroom tryst with rock god Stacee Jaxx (Clay English).

When Act Two opens, it is the final countdown for the bar and its washed-up rocker owner Dennis (Nathan Skaines), with two villainous German developers, Herz (Jim Price) and his son Franz (Sam Piaggio), scheming to tear down the bar, meaning that it’s up to spirited city planner Regina (Madi Jennings) to stop them. Jennings makes for a fierce Regina, tough and passionate in her bohemian activism, however, it is Will Boyd as charismatic narrator and assistant manager of the Bourbon Room, Lonny who steals the show, clearly having a great time with the demanding role that rarely sees him off stage. His delivery of the script’s many raunchy jokes and sight gags is well timed for maximum comic effect as he recounts the history of the club and narrates events on stage with meta-theatrical fourth wall breaks. And English smoulders as lead singer of the band Arsenal, the egomaniac Stacee Jazz, slinking through his solo, ‘Wanted Dead or Alive’ with vocals as large as his character’s overblown ego.

Hodge and O’Donoghue share nice vocal chemistry as aspiring rock singer Drew and aspiring actress Sherrie; the epilogue of Journey’s iconic ‘Don’t Stop Believing’ is particularly harmonious in their hands. Individually, they each have some powerful vocal moments too, such as in Sherrie’s ‘Harden My Heart’ and Drew’s ‘Oh Sherrie’, which highlights Hodge’s vocal power and impressive ability to hold a note.

Despite the show’s upbeat performances, some shorter sections lag a little and occasional microphone lapses sometimes take the audience out of its moments. Holly Leeson’s energetic choreography takes the audience back to the excesses of glam metal music videos and far-from-subtle costumes effectively capture the era’s idiosyncrasies. “Rock of Ages” is, however, all about the music and the on-stage band (musical director Julie Whiting) brings the range of its soundtrack of well-known songs to life, from a synthy-sounding ‘Final Countdown’ to an initially stripped-back and ultimately revealing ‘Hit Me with Your Best Shot’. In each and every song of its 20+ long setlist, the band brings it, pumping out tunes with attitude, even if initially it is at a volume that sits atop rather than in support of the singing voices in the opening number.

Comedy comes from rock ‘n’ roll antics, fourth wall breaks, overt innuendo and deliberately over-the-top, campy characterisation, all of which are appreciated by a buoyant Saturday night crowd. While in its take back to a sexier, sexualised time, the story relies of stereotypes, there is a clear sense of not taking itself too seriously. Indeed, there is an infectious, spirited energy from all members of the large on-stage cast that ensure that audience members walk away holding on to the feeling of its satisfaction.

“Rock of Ages” is a jukebox musical built around classic rock songs of the 1980s (especially those of the glam metal bands of the decade), curated together to fit the admittedly-thin narrative. It may not be a musical for the purists, but, in its celebration of rock and roll excess, in Phoneix Ensemble’s hands, its experience is nothin’ but a good time.

It is 1987, in the city build on rock and roll. Along Los Angeles’ famous Sunset Strip, the fictional Bourbon Bar celebrates rock ‘n’ roll debauchery as the lifestyle of dreamers. Busboy and aspiring musician from South Detroit, Drew (Adam Goodall) just wants to rock, but every musical needs a love story so enter innocent small-town Kansas girl Sherrie (Jayde Bielby). Of course Drew has been waiting for a girl like her, but before a budding romance can begin, she engages in a bathroom tryst, wanting to know what love is, with rock god Stacee Jazz (Stevie Mac). 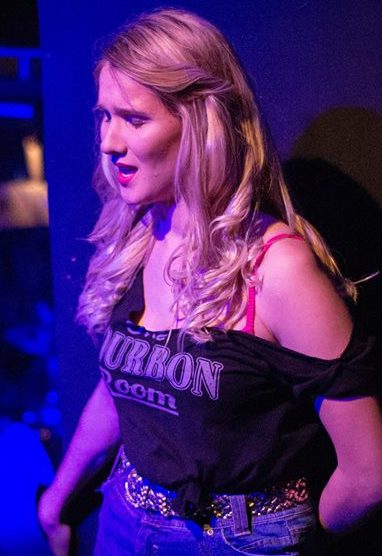 When Act Two opens, it is the final countdown for the bar with German developers scheming to tear down the strip’s district. The paper-thin premise brings with it one-dimensional characters such as washed-up rockers Lonny (Scott Johnson) and club owner Dennis (Frog Johnson) as protagonists against the cartoonish German villains Herz (Joel Mikkelson) and his son Franz (Beau Wharton). Indeed, the realest thing about the show is the talent of many of its performers. 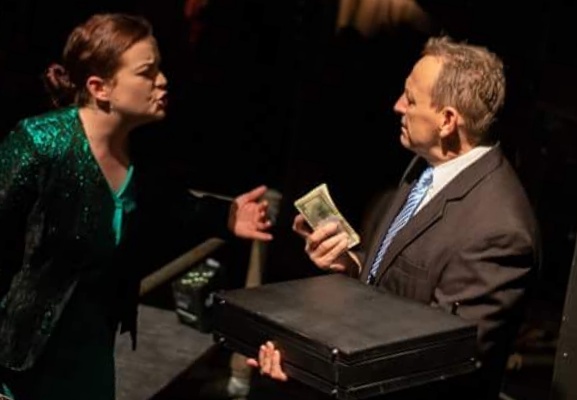 Goodall and Bielby are well-cast, bringing a genuine likeability to their protagonist roles. Jacqui Power makes for a fierce Regina, tough and passionate in her bohemian activism and blistering in her vocal lead of ‘We’re Not Gonna Take It’, while as the owner of the strip club at which Sherie accepts work, Rebecca Kenny-Sumiga is vocally thrilling. Indeed, her ‘Shadows of the Night’ mashup with Bielby’s ‘Harden My Heart’ is an Act One highlight.

Scott Johnson is simply sensational as energiser-bunny narrator, Lonny. His energy never wanes in the demanding role which rarely sees him off stage and while his knowing parody delivery is well timed for maximum comic effect, his rough-edged vocals are also perfectly era-evocative. And Stevie Mac smoulders as the more-swagger-than-substance egomaniac Stacee Jazz, slinking through his solo, ‘Wanted Dead or Alive’ with Axl Rose/Bret Michaels electricity. 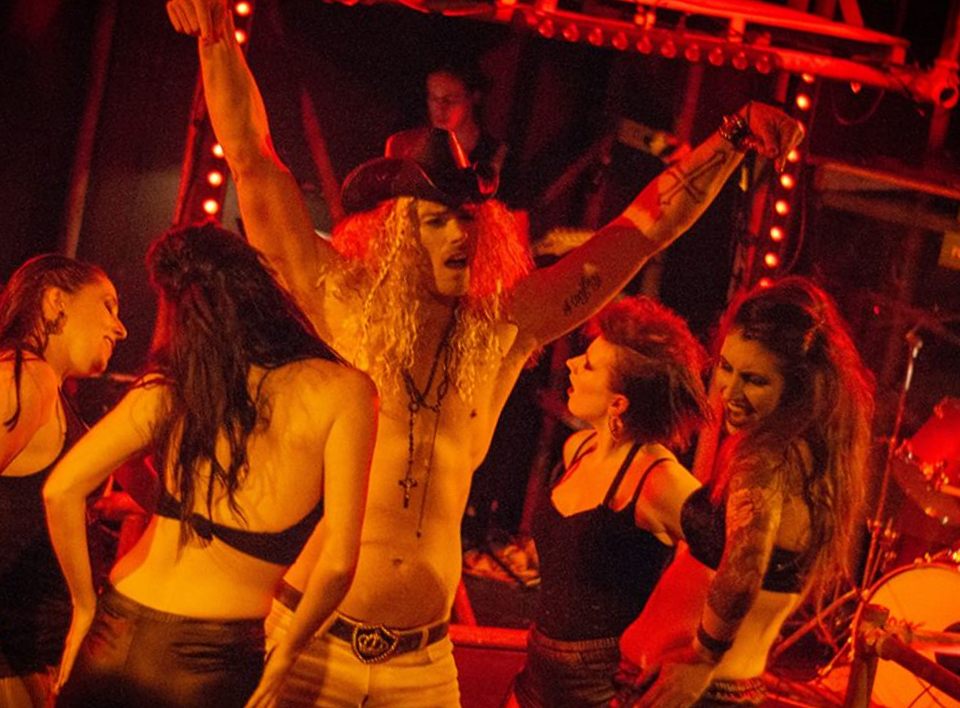 But every rose has its thorn and occasional microphone lapses sometimes take the audience out of the show’s moments. Otherwise, the aesthetic is on-target, apart from a rogue 1990s Incubus band t-shirt. Indeed, the production’s use of the Tin Shed space shows that it is not the size of the theatre, but what you do with it that counts. The band appears on-stage amongst scaffolding that not only gives the setting some grunge, but effectively allows for multiple cast entry and exit points. The choreography is far from ground-breaking in its simulation of the era of excess’ moves, but it is full of energy, even within its limited stage area.

Silly story aside, “Rock of Ages” is all about the music, packed full, as it is, of rock anthems and warm and fuzzy big-hair ballads alike. In each and every song of its 22 long setlist, the band (Musical Director Nick Ng) brings it, pumping out songs of the Whitesnake sort along with lighters-in-the-air Foreigner-type ballads, live and loud as they were meant to be experienced, even if initially it is at volume that sits atop rather than in support of the singing voices.

Comedy comes from rock ‘n’ roll antics, fourth wall breaks and audience interaction, mostly from narrator Lonny, but also from the deliberately over-the-top, campy characterisation of Beau Wharton as Franz from Hambug, especially in his crowd favourite number ‘Hit Me with Your Best Shot’. Be warned though, even though there is even a jazz hands number, its content is often of adults-only type innuendos. 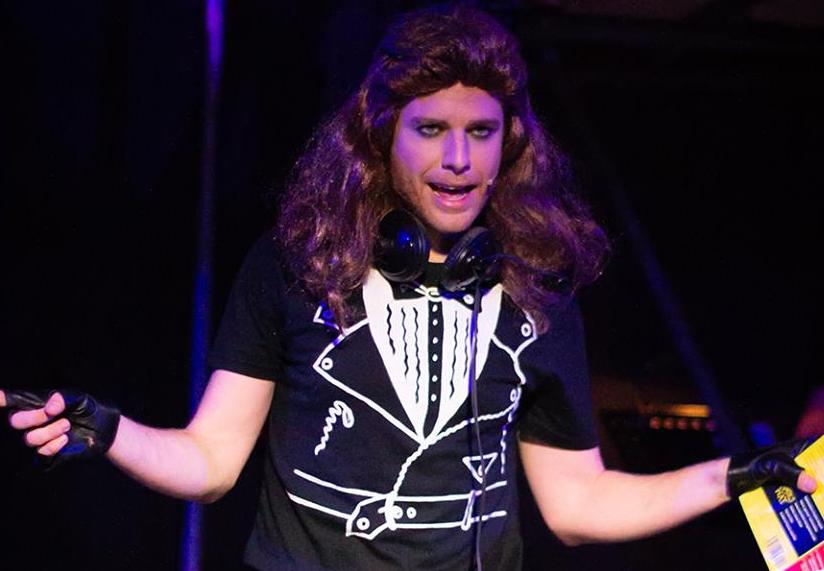 As is often the case with community theatre, the cast represents a mixed bag of performance talent, however, all have an infectious, spirited energy. A show that doesn’t take itself too seriously often brings with it an automatic sense of fun and this is certainly the case with this take of the mega rock musical; you will know the lyrics and want to sing along, such is its nostalgic musical appeal.