Like “Sex and the City”, “Tiddas” is a frank and warm look at female friendship. Far from the hustle and bustle of New York City, however, the story is set under the blooming jacarandas of 2022 Brisbane, which makes its world premiere as part of this year’s Brisbane Festival, especially appropriate.

The page-to-stage adaptation of playwright Anita Heiss’s best-selling novel tells the story of five old high school friends reunited to form a book club called vixens in acronym of their first names. The women, we learn have been best friends for decades, now meeting once a month to talk about books, but also, as bookclubs also are, life, love and all the rest. And so their candid conversations become a springboard for reflection of their differing journeys towards their forties and desire for the energy of their youth growing up together in the little smoke of Wiradyuri country’s Mudgee before over time all moving to big smoke of Meeanjin (Brisbane, created through the set and costume design of Zoë Rouse in work with Jason Glenwright’s lighting design and Wil Hughes’ sound design).

Recently divorced Veronica (Anna McMahon), the Switzerland and organiser of the group, just wants to be happy again. Meanwhile, career focussed in her ambitions to become Australia’s Oprah, Izzy (Phoebe Grainer) is a contrast to Xanthe (Shakira Clanton), desperate to have a baby and buy a Queenslander to settle down to her ideal life. Ellen (Chenoa Deemal) is fiercely single and loving her independence, while successful author Nadine (Louise Brehmer) appears to be living the dream.

There is much with which audience members of a certain similar age can identify from within and across their diverse characters, and indeed from everyone with regards to how almost comically little disagreements can escalate. While initially you might yourself identifying with one character (for me it was group organiser and post-it note prepared Veronica), as their stories unfold in all their real-life complexities, this soon shifts into realisation that we perhaps have a part of each vixen within us somewhere.

What elevates the story, however, is its integration of commentary on and contemplation of bigger issues stemming from the social political climate of the time. Discussion of reconciliation and identity arises from the women’s conversations about and consideration of possible books to read, with conflict emerging from this and also the secrets that exist despite the longevity of their friendships.

Men feature within the women’s story (in addition to Roxanne McDonald’s appearance in a couple of small roles, Sean Dow jumps in and out of playing all male roles), however, ultimately “Tiddas” is about its women. Through their support of each other through differing world views, we are shown the importance of sharing stories. And how wonderful it is to see a story on stage that would so easily pass the Bechdel test measure of women talking to each other about something other than a man.

While all actors are impressive in their commitment to such distinct characters, perhaps all unlikeable in some way at some stage during the story’s unfolding, comic relief comes primarily from Demmal as the straight talking Ellen. Yet she also brings some softness to the reasoning for her character’s survival and resolute determination. Clanton also gives a standout performance as Xanthe, bringing nuance and sensitivity to the extremes of her character’s moving emotional journey through the story of a year in their lives.

We may have seen their dilemmas played out in stories before, but these are still characters who are both believable and authentic, strong individually, but stronger together, which befits the play’s title. (Tiddas is, as the program reminds us, a shared Aboriginal word for sisters, not just by blood, but as created by the strong bonds of friendship and love over years of lived experience and travelled journeys). While sometimes brutal in its bitter travel through the stretch of friendship bonds, under Nadine McDonald-Dowd balanced direction “Tiddas” is ultimately a celebration of the universal language of sisterhood, easy to watch and enjoy, especially with your old sisterhoods of strength.

A pre-show soundtrack of Oz-rock classics adds an air of excitement to the experience of audience members awaiting the Brisbane season of Belvoir Theatre’s “Barbara and the Camp Dogs” by Ursula Yovich and Alana Valentine. It’s an effective emphasis of the pub rock atmosphere for anyone who hasn’t gathered the feel of Set Designer Stephen Curtis’ bold aesthetic vision, detailed even down to the corner-stage’s backdrop blackboard advertising happy-hour specials and the gawdily-patterned pub carpet beneath barstools and well-worn couches.  With the audience banked around three sides of the pub stage and surrounds (where some audience members are also seated), a band takes the stage and the scene is set for 100 minutes of raw rock and powerful dramatic performances.

Barbara (Shakira Clanton rather than Ursula Yovich for this mid-week performance) and Rene (Elaine Crombie) are two Indigenous siblings and Sydney performers with their back-up band, the Camp Dogs. When a family crisis calls them back to Darwin and then on to their home town, the complexity of their relationship and, in particular, Barbara’s ferocity, unfolds. And from the time the duo take to the road to trip down to Katherine, when things pick up pace-wise, it is thanks to the pair’s humorous interactions, full of the sarcasm, mockery and the outright insults that are so common in sibling back-and-forth banter.

True siblings or not, these two woman sure can sing and songs feature predominantly throughout the production. There are many musical numbers, particularly in early scenes, making it difficult to recall individual highlights, without a song list in the program to assist. The soundtrack starts with loud and energetic rock numbers that vibrate with energy, however, the highlights come when songs slow to more emotional numbers in reveal of Barbara’s drives and disappointments and resulting conflict of belonging. Rather than dominating, music in the show’s second half is used to subtly signal a change in its tone, of the kind not realised until after its occurrence. And its final number, ‘Let in the Love’ with Troy Jungaji Brady serves as an acute reminder of the thematic message at its core. 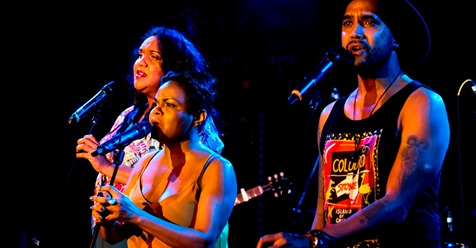 Elaine Crombie is genuinely entertaining as ever as the personality-plus Rene, however, as is suggested by the title, this really is Barbara’s story. As understudy stepping into Ursula Yovich’s shoes, Clanton gives a sensational performance in the eponymous role, evidenced not only in her angsty attitude but in her harrowing show of grief’s real rawness and confronting monologue about the theft of country, community and culture. It’s a powerful political message moment, of the Get Krack!n finale essential viewing sort.

“Barbara and the Camp Dogs” is a show of big themes explored in intimate ways. Its balance of humour and drama is entertaining, thought-provoking and ultimately moving in that sneak-up-on-you kind of way. Add in its easy-to-follow narrative, absorbing performances and sensational vocal displays and it is easy to appreciate its previous seasons’ successes.

Photos of Ursula Yovich as Barbara