David Williamson’s realist drama, “The Removalists” is an Australian classic for a reason and, as such, it is still able to engage and resonate with audiences, although in quite a different way to when it first premiered. Far from its landmark status transforming it into a monument, however, Critical Stages shows how the work is (unfortunately) as resonant as ever as it challenges its audience to ponder whether aggression is an instinctive human trait.

The power of the play’s storytelling is in its familiarity. The 1970s is far enough away from our modern experience to be different, but still close enough in notion or experience to make sense. The furniture, clothes and interpretations of acceptable conduct may be different, yet at the core there are behaviour patterns that still seem familiar.

Although “The Removalists” is primarily a portrayal of suburban Australian life in the 1970s, its exploration of sexism, domestic violence, and power and authority are important, if only to remind us of how far we have hopefully come from a time where sexual innuendo and inappropriate touching were not taboo and ‘giving your wife a bit of a shove’ was hardly arrest-worthy. In theory, there is no longer the institutionalised chauvinism portrayed, however, the show also examines notions of authority and corruption that have certainly rung true in the years since its 1971 publication, especially in this state (just check out Matthew Condon’s investigative books about Terry Lewis).

It is new recruit Neville Ross’s first day out of police training and what a hell of a day it turns out to be. The sub branch is the best posting in the city; the workload depends on what sort of mood you are in, he is told by his superior. Sergeant Simmons (Laurence Coy) is an unsettling character, an artefact of a man with strength of his corrupt convictions, who reveals the darkness of humour nature as he twists our perception of his interaction with Ross (Josh Anderson) and then victim Fiona (Lucy Heffernan) and her sister Kate (Caroline Brazier) from humour to discomfort. 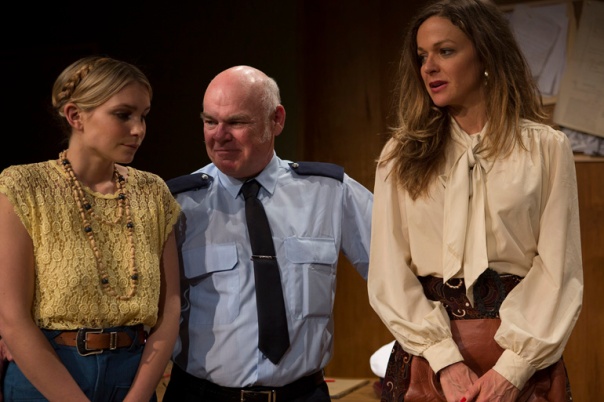 As the policemen detail Fiona’s assault at the hands of her husband, Kenny, Simmons’ lechery become unsettling, culminating in Act Two in a hypocritical, misogynistic tirade of judgment against the adulterous Kate. Similarly, at first Neville is likeable in his naivety, however, soon we are not sure how to feel about his character, such is the skill of Williamson’s writing.

From the beginning it is clear that this is a play of much humour, however, it is a humour that resonates now due to inappropriateness and political incorrectness. The play is both well-written and well-structured so that the segue from the humorous to the horrifying happens subtly, making its themes all the more conforming. Although we are initially positioned to hate the drunken, wife-beating Kenny (played to perfection by Ashley Lyons), sympathies soon change in response to his treatment by the local policemen.

The action is divided into two acts, distinct not only by the changes in audience empathy, but the intermission break and the changed set from functional police station to domestic apartment set, suitably furnished in the oranges and browns of ‘70s decors, down to the smallest of details. The costumes too, project an immediate sense of time and place, which contributes to the realism and thus the impact of the work.

All great art comes from a sense of outrage and as modern audiences, we should be outraged by the disturbing gender politics being portrayed on stage because “The Removalists” is an unpleasant story. It is difficult to watch but also very rewarding, for in its gritty explorations of some tough themes, there are some very fine performances.

“The Removalists” is David Williamson at his very best. It is not just an Australian classic, but a powerful play with an excellent ensemble cast as unsettling characters whose interactions are riveting to watch. Indeed, the whole cast give impressive performances, particular Ben Wood as the titular removalist whose dialogue delivery and comic timing are simply wonderful. The story, however, is of the policeman, and it is fitting the play’s final shadowed and harrowing image is of them, for it is their actions that will linger long after your leave the theatre.