William Shakespeare’s most famous historical play “Richard III” is a classic of the stage, revered by historians and Shakespeare purists alike and recognisable by the endurance of its protagonist’s valiant declarations. So when Naomi Price begins “The Tragedy of King Richard III” with the word ‘Now’, audiences may assume they know where things are going.

While the work does include some sections of Shakespearean dialogue, its opening lines are not authentic to the Bard’s iconic depiction of England’s last warrior king. But what does authentic mean anyway? This is, as Price implores, an imaginative experience. The raised rectangular centre stage needs to be reimagined as the municipal carpark in Leicester, under which the villainous monarch’s skeleton was discovered in August 2012. And who says that our reviled regard for him is deserved because, as Price surmises, nobody knows history due to stories’ silences, gaps and biases. And with this, the show’s title assumes meaning anew. 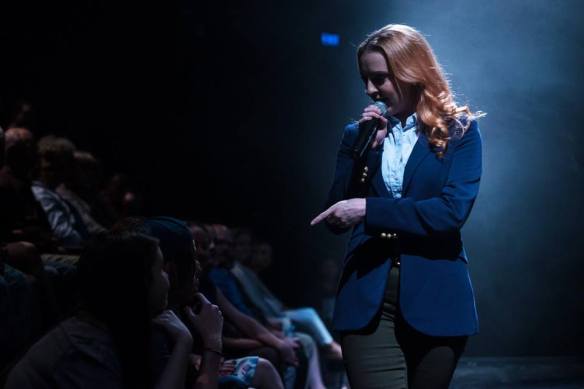 This is not Shakespeare’s depiction of King Richard III’s Machiavellian rise to power and short reign (for a mere two years, two months in the 1480s) as a “tyrant rudely stamp’d”, “deformed, unfinish’d”. Rather the show sits in the divide of what Shakespeare wrote and who Richard actually was. And from the outset its creative choices show that there is a moral behind the monster. Rather than allowing the character to be defined by the lead actor’s physicality, there is no hunch or leg encased in a calliper splint like in Kevin Spacey’s realisation at London’s Old Vic. Rather, there is just an early visual impression of the deformity through clever use of shadow as projection of his body’s shape. 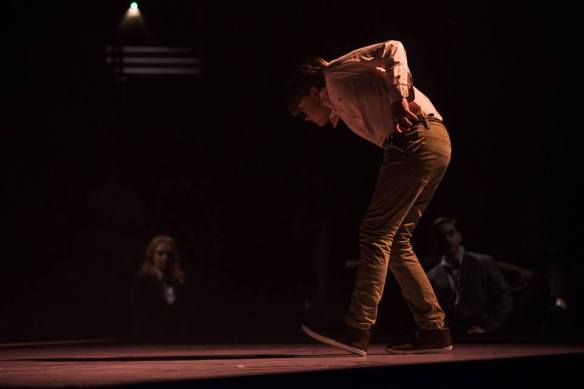 Intent on bringing the narrative’s players out of the shadows, “The Tragedy of King Richard III” finds new depth in its characters. As Richard (a role shared with Peter Rowland), Atticus Robb is appropriately initially hesitant but after a while arrogant in his quest for the throne, yet so sympathetic is his portrayal when he unleashes his furious wrath in a standout monologue, that it is met with a whoop of support from invested audience members. His brilliance is made all the more impressive by the fact that this represents the young Brisbane actor’s (he was born in 2002) first profession stage performance. 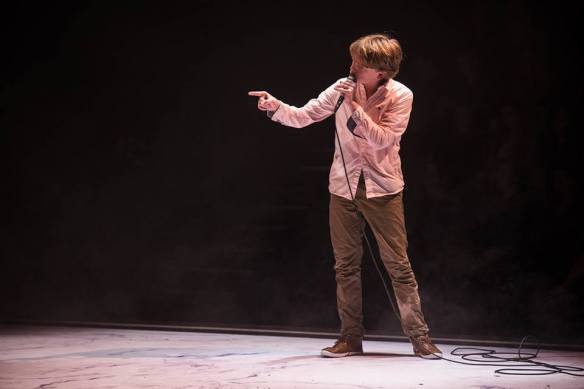 Although the fearlessly talented Atticus dominates the stage, this is far from a one-man show. The cast is excellence, as expected. Particularly as Richard (and England)’s Queen, Anne Neville, Amy Ingram confettis the stage with sass, bringing many of the show’s biggest laughs in articulation of her modern teenage sensibilities in initial interaction with a young Richard. 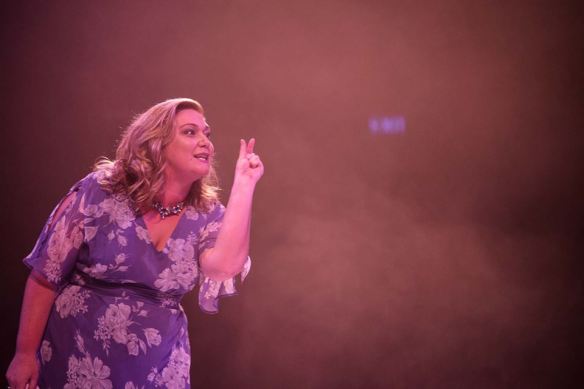 Another silence filled in realisation of the show’s sometimes feminist discourse, is that of Margaret of Anjou, another English Queen, the wife of King Henry VI, whose husband was killed by Richard. Helen Howard gives a powerful, unrelenting performance, vehement in her passion but also cement of an angry feminist stereotype. 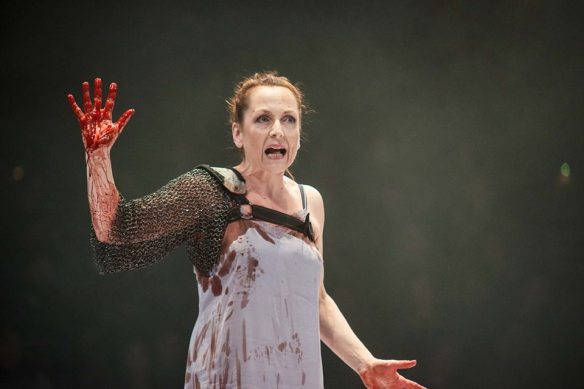 Also commanding in her performance is Naomi Price, particularly as the show’s ringmaster of sorts, engaging audience members in her collective self-referential proclamations and reflections, and later as incantation of Queen Elizabeth 1st (granddaughter of Henry Tudor, Richard’s killer) in illustration of our proximity to the problem. And having Price in the cast allows for the wonderful inclusion of live musical numbers. Whether in Whitney Houston mode popping out soundtrack to a disco-balled dance off between the young Richard and Anne or belting in exploration of the nature of power in ‘No Church in the Wild’, she more than delivers vocally, adding another layer to the already intricate story. 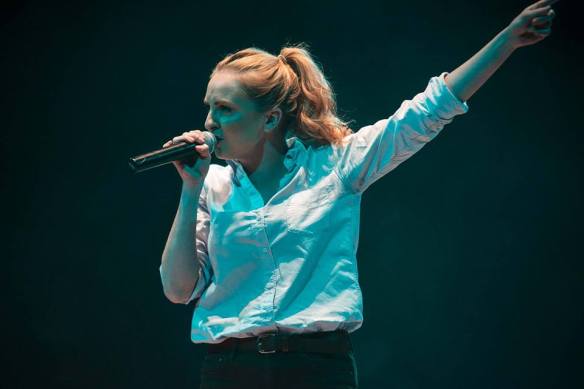 Todd Macdonald also shines with a superb performance, firstly as the father Richard barely knew and then later as Master Shakespeare at the Globe theatre, revelling in the power of his creative realisation of Richard III. His embodiment of the Bard delighting in his dramatic powers is energetic and invigorating as he leaps about with jester-like frivolity, drawing the audience into his verve. Then things turn darker as he morphs into the monster who created the monster, envisaging the king as a sinister comic performer just four coffins away from the throne. 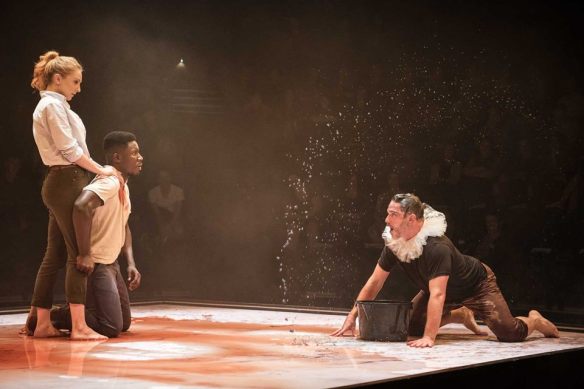 The fourth wall breaks in these scenes, indeed throughout the entire show, are not just for comic effect but add to the drama of the piece, enticing audience consideration of its core questions. And when Pacharo Mzembe and Robb discuss the representation of murder on stage, as themselves not their characters, it takes the audience to an intimate and affecting place. 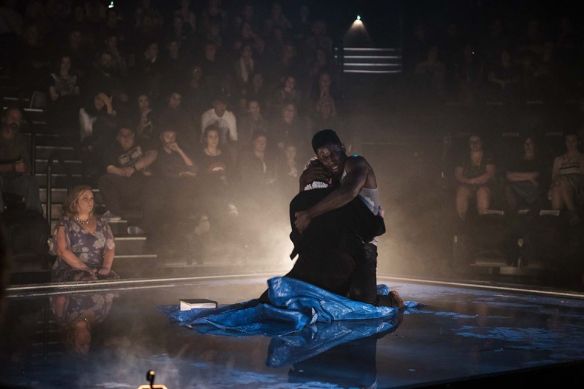 The technically ambitious design is captivating in its realisation, full of powerful visual imagery thanks to Jason Glenwright’s smooth lighting design. The stage is filled with blood and water in nightly ruin of its stunning costumes. This is physical theatre and dramatic movement at its best courtesy of Movement and Fight Director Nigel Poulton. 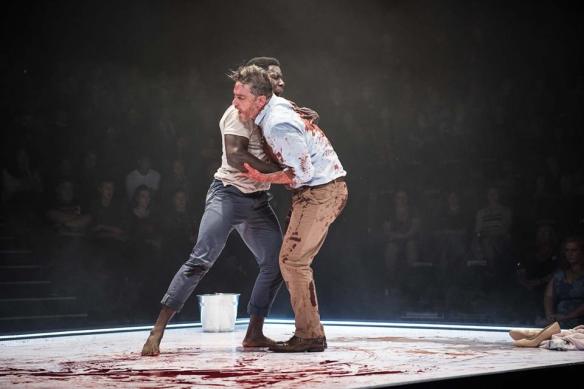 And when Mzembe raises sword in final duel in a rainy Battle of Bosworth Field, it is an evocative experience. While the show is filled with bloody mayhem, however, its presentation of the violence and discomfort is deliberately desensitised, contrasting, for example, impression of animal torture against bubbly teen talk of Euro Disney in comment perhaps upon modern world sensibilities. 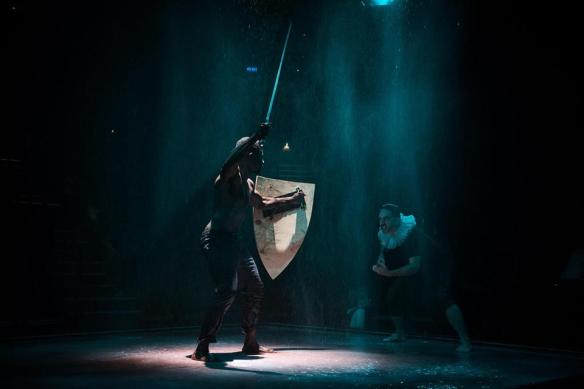 While feasibly more enduring than the historical character, Shakespeare’s ill-famed Richard III is a fictional realisation, motivated by a playwright championing the King’s heroic vanquisher, Henry VII, as founder of the new Tudor dynasty which took England from the Middle Ages into our modern world of grim fascination. In challenging this, co-writers Daniel Evans (Winner – Queensland Premier’s Drama Award 2014/2015 for Oedipus Doesn’t Live Here Anymore) and Marcel Dorney (Winner – Queensland Premier’s Drama Award 2010/2011) provide a bold play packed full of stimulating ideas about how bad history often makes for the best stories. In lesser hands this notion could have been lost to subtly, but under Director Daniel Evans, “The Tragedy of King Richard III” emerges as a first-class theatre experience that exposes the truth of the statement that you don’t know what you don’t know.

While new work is always exciting, the appeal of this work is so much more than just its novelty. Its ideas are so invigorating that they almost demand a second viewing to fully grapple with the show’s unexpected provocations. It has been said that the best indicator of a show’s calibre is if a reviewer will return independently to see it again; I’m planning my next visit now.