Critically acclaimed Brisbane playwright Sven Swenson’s “Tiptoe” is set in 1918/19 Logan Village. Even without having read any show blurbs, it is clear that staging is representative of a time gone by; the Powerhouse Theatre stage looks appropriately weathered and worn in its representation of a sparse house. For a moment it feels a bit Anne of Green Gables-ish, with mention of porch chair pondering and an evening visitor from across the gully. It is quickly clear, however, that Binny Broadroot (Sarah McLeod), is no Anne of Avonlea.

When the audience meets the foul-mouthed, formidable and very funny Binny on Valentine’s Day 1919, she has little to celebrate. With a lover lost in Great War, she is full of superstition and yearning, but only behind closed doors. Six weeks earlier, on New Year’s Eve, 1918, Angus Drummond (James Trigg) and Seth McClusky, (Sam Ryan) two recently returned soldiers, sneak away to a dilapidated humpy to tend to their home-made still and share in their forbidden love, unaware of the far-reaching consequences about to be befall. 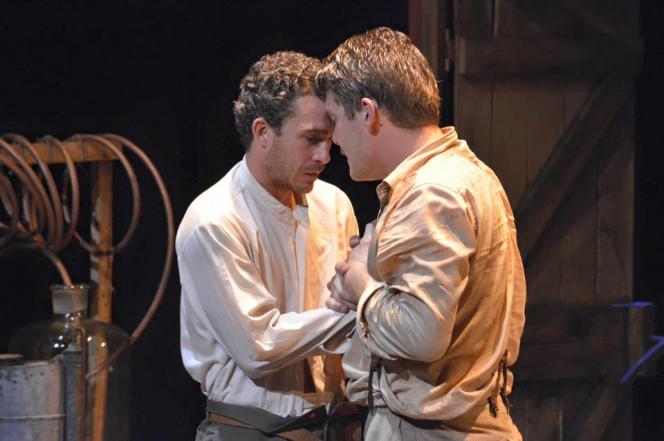 Each of these three characters desperately clings to their vision of a perfect life as the two timeframes unfold simultaneously side by side. And the result of the overlap of these two different scenes is quite astounding to experience. Engaging as the stories are individually, when they collide together with shared lines and thematic focus, audiences can only marvel at the precision and craftedness of the piece, as they try to keep up with its fast pace and only retrospectively recognisable hints, such is the script’s subtle cleverness. 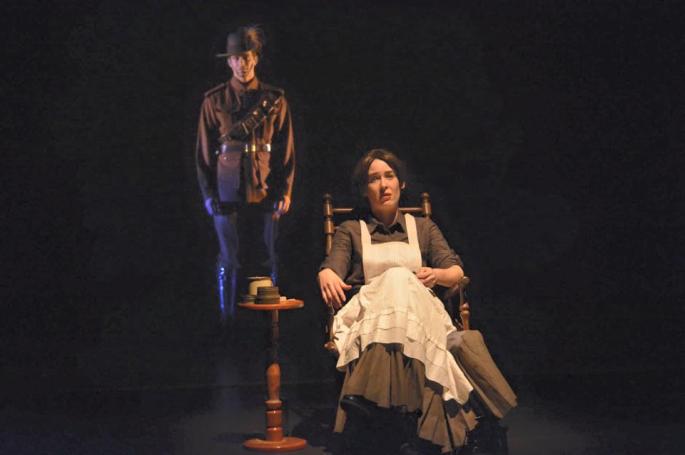 The two scenes occur under the watchful eye of Binny’s fallen beau, Snow (Michael Deed), who hovers as narrator of his letters home from war. Full of eloquence in his meditations of life and love, his words are perhaps the most enduring of the evening, as he takes audiences into the heart of the human condition with observations about secrets and life, emphasising the Australian psychological thriller’s examination of the price of the post-war fairytale in a changed world and the haunting power of secrets, for there are more wars that just those that are named.

Sven Swenson has a talent for dialogue and “Tiptoe” proves to be no exception. The script is brilliant and its dialogue strikingly authentic down to the finest of language details. The show is a long one, told as it is in three acts with two intermissions, but necessarily so, given the many clever threads to its tightly-woven fabric. And it is only in Act Three, when the plot twists around upon itself in unforseen ways, that its genius can truly be appreciated.

As the always inappropriate, commanding central figure Binny, Sarah McLeod is captivating, however, she could not shine as she does without the impressive work of her fellow performers, particularly Caitlin Hill as young newly-wed Justine Cutler. Initially girlish as accused by Binny, she soon transforms before the audience’s eyes. And while Acts One and Two belong to the ladies, Act Three is dominated by Sam Ryan’s masterful execution. Cameron Clark, too, as Justine’s youthful newlywed husband Archie, gives an appropriately youthful performance when naïve, when drunk and when naïve and drunk.

“Tiptoe” is a daring and confronting show in its inclusion of strong language, simulated sexual violence and full frontal nudity. But it is also an outstanding piece of theatre that needs to be seen more than once, if only so you can take in the elements missed the first time around. There is so much happening on stage, it is difficult to settle focus for any length of time, which keeps audience members guessing until its final moments and enhances the discomfort of some of the gothic thriller’s storyline. It might be more marathon than sprint, but this only makes the “Tiptoe” journey more satisfying.