A good play’s virtues are so simple and obvious; they essential revolve around the notion of story. And the story of “Grounded” is a timely and absorbing one. The protagonist is a nameless female US fighter pilot (Libby Munro). When her years of flying, adrenalised by the full throttle allure of ‘the blue’, are thwarted by the pink line of a pregnancy test, she is grounded in the nightmare of the ‘chair force’ of Reaper drone pilot monotony, remotely controlling an $11 million eye-in-the-sky robot that can destroy convoys in seconds, from a trailer in Las Vegas in front of a screen of shades of grey.

Clearly, this is not a career turn to her liking; the show begins with her lying on stage, her suit shed and on the ground alongside, reflecting on how she never wanted to take it off. And when she then puts it on it remains so, in some way, for the duration, as emphasis of how much it is a part of her identity. In what is essentially a 75 minute monologue, Monro’s performance is unrelenting in its energy as she controls the ebbs and flows of the narrative, vocally through use of pace and pause but also visually through body language and the smallest of nuances of facial expression.

A one-person show is certainly demanding and Munro’s absorption of her character is complete and utterly authentic. The natural conversational style of her commentary about the gaudiness of the Las Vegas strip, when she and her husband and baby girl move to Nevada for her new posting, reveal a humour in their abrasive honesty, while her frustration with the repetitious tedium associated with 12 hour shifts of piloting unmanned drone flights borders on an anger that the audience is made to appreciate through some (perhaps excessive) emphasis. Clearly, this is a fierce, confident woman, brash in her blokiness and evidently more comfortable, when not high in the sky, sharing a post-shift beer with the boys rather than returning to day-to-day domestic routine without opportunity to decompress and share the classified nature of her day’s doings.

This is a well-written piece of theatre from George Brant, full of poetic notions to its rhythm and pacing, and a real craftedness to its imagery not initially appreciated but later recognised in revelation of its emerging larger themes. And with newly-appointed QTC Artistic Associate Andrea Moor as Director, it is certainly in safe hands. Moor clearly knows how to direct stories of strong women, as audiences have previously seen in her work with Monro in QTC’s “Venus in Fur”. And the fact that the team are bringing the show to the Diva’s series is absolutely appropriate, given its focus on celebrating women of outstanding talent. 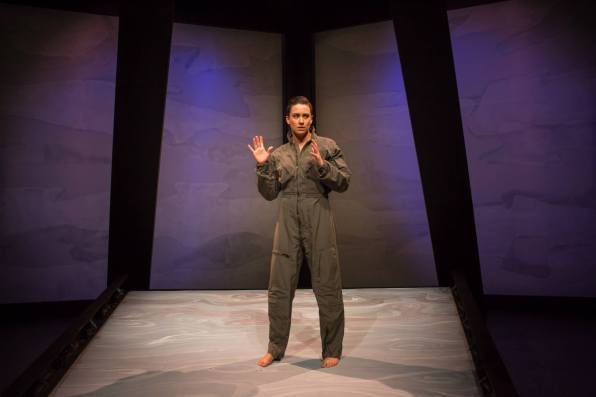 The set is exceeding simple, making good use of The Greenhouse’s more intimate Diane Cilento Studio space with an enigmatic backdrop design pattern to prompt audience members into ‘is it showing the sky or a camouflage pattern?’ debate of the blue/gold dress type. And while lighting effectively marks mood changes when The Pilot’s recount realms into recalled conversations, it is Tony Brumpton’s soundscape that the most memorable design element as it uses the beat of a heart to accentuate the suspenseful moments that represent the reality of battle in modern warfare and the complex personal experiences the result from this.

“Grounded” is an intense theatrical experience of sustained suspense that quite literally ends with a bang. Its insight into the experience of a grounded pilot, representation of ethical dilemmas and illustration of the nature of post-traumatic stress disorder as the sands of America and Afghanistan start to blur, are compelling. However, ultimately it is testament to Monro’s incredible talent that that they are able to hold the audience’s attention for the entirety of the piece. In combination, they make for a wonderful celebration of the work of female artists and it is of little surprise to discover on opening night that the show’s season, QTC’s tenth for the year so far, has already been extended for a week.