It is a rare thing to be an hour into a show and still have no idea at all where it is going to go. And in the case of Filter Theatre’s “A Midsummer Night’s Dream”, this is a very good thing, given the absurdity with which the group has taken what is arguably Shakespeare’s most popular comedy and transformed it into a giddy and gleeful postmodern romp.

That said, it does start a little slowly with, like so many Shakespearean works, a prologue, delivered with true Irish charm, but of frantic pace by Peter Quince (Ed Gaughan). Drifting into tangents about the Royal family, for example, he tells audience members that they are about to enter the Ancient Athens of ‘fantastic architecture and thriving homosexual culture’. He promises that the part of Bottom is meant to be played by a famous actor, but a technical hitch means that an ‘audience volunteer’ may have assume the role. It is all in keeping with the clumsy craft of the play’s Mechanicals’ amateur dramatics, and, as the curtain rises on the Athenian court, Shakespeare’s society is represented in the play by three distinct class groups, lovers, mechanicals and fairies. A series of mix-ups orchestrated by king of the fairies Oberon (Harry Jardine) causes lovers’ quarrels between Lysander and Hermia, Demetrius and Helena, frantic chases and general chaos that needs to be resolved before King Theseus’s fast approaching wedding.

What the audience sees, however, is no ethereal forest setting with set design placing the action within a run-down public bathroom of white tiles, water leaks and paper-walls through which characters literally burst on to the stage. Staging is chaotically creative as pieces are destroyed and as Puck (Ferdy Roberts) flings blue liquid gel love juice around, to instant aphrodisiac effect. Oberon, dressed as superhero in all-in-one suit and cape, flies, falls and is covered in flour as part of an epic food fight (with audience involvement). Rather than unruliness, this makes for a hilarious experience that flies by without realisation of its near two hour duration. It’s not all froth and frivolous bubble, however, for as contrast to the mania of the Mechanicals, the lovers, speak only Shakespeare’s words. 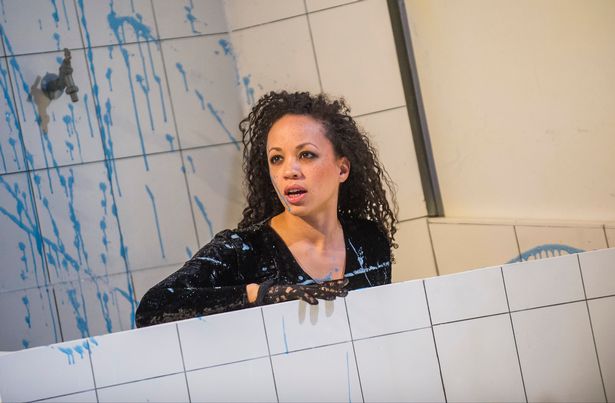 This is a high-energy and physically-demanding show and all the performers deliver accordingly. Francesca Zoutewelle is solid as Hermia, Cat Simmons is an initially dignified Titania and John Lightbody is sensationally smooth as the lustful Lysander, once transformed entirely from his former unassuming self in reaction to the love potion. And Demetrious (Karl Queensborough) makes music out of the Bard’s iambic pentameter. Another standout is Ferdy Roberts as grumpy, tattooed and mischievous rocker roadie/stagehand Puck, from his commanding entrance to the dignified delivery of his final wishes of good night unto all. And Fergus O’Donnell makes the scripted chaos of Bottom’s ascension to stage seem spontaneously improvised. Together, they provide a refreshing interpretation of the characters 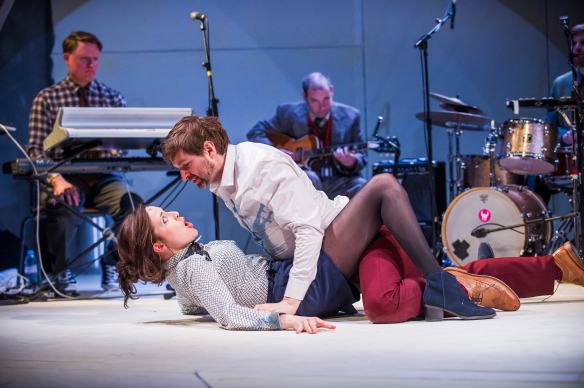 Despite its anarchy, in many ways, this “A Midsummer Night’s Dream” keeps with Shakespeare’s original text though its weave of comedy through all three of the plot strands and, in particular through the ridiculous mirth of the working class Mechanicals and their presentation to the audience of an abbreviated “Pyramus and Thisbe”, making us laugh at them rather than with them, in a way different to many other of Shakespeare’s jesters and clowns.

Every comic device is evident in this fast-moving funny-fest. There are moments of stand-up (showing that apparently 20 years is in fact too soon for a Michael Hutchence joke), celebrity impersonations, spontaneous songs, slapstick, clowning and innuendo. The greatest laughs come, however, from notice of the little details, like the lameness of a lion costume and Oberon and Puck’s pull up of picnic chairs and crack open of drinks to watch the lovers battle it out. 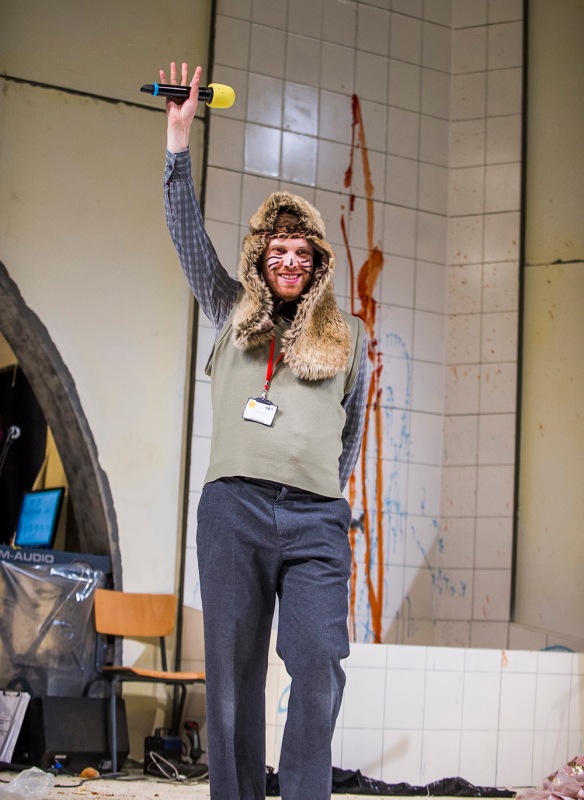 Filter Theatre have made their reputation mainly for inventive takes on classic plays and this is especially evident in their sound innovation, and Chris Branch and Tom Haines’s sound design and original music is masterful. Music is effectively integrated into this production and the live band, doubling as Mechanicals, in break from their play of retro kitsch Barry White and The Ramones numbers, add the necessary magic to assist the audience in imagining the invisible fairies to life and suggesting Bottom’s transition to donkey by the sounds of coconut-shell hooves clapping. And a fight between Lysander and Demetrius is enacted as a video game, with Puck at the console, with the noise of gunfire and explosions.

Although a modernisation of a Shakespearean classic is hardly a ground-breaking idea, Filter Theatre manages to bring something truly unique to “A Midsummer Night’s Dream”. Characters and scenes are presented with new purpose, freshly realising, in particular, the text’s sexual innuendo. It’s not always cohesive, but it is superlatively funny in its gleeful irreverence. Cutting and adding so much text is filled with risk, but it is risk that exists at the foundation of all exciting art. And, in this instance, the liberties taken with the text make for not only a highly-entertaining, but a genuinely accessible version. I can’t remember the last time I laughed so much in the theatre.