Those who have encountered Counterpilot’s collective of interdisciplinary artists previously, know that their theatre is more experience than static show. And “Spectate” is no different. The all-encompassing work is immediately intriguing as, upon entry into the theatre, audience members are met with the sight of velvet red curtains in frame of a black and white film. With sounds of Dixieland-esque tunes soundtracking, it is evocative of a time almost a century ago when Harry Houdini was a marvel amongst men.

Through audience member headphones, we are told that we are at the show of the incredibly famous Austro-Hungarian-born American stage magician and stunt performer. The dimming light makes for a meditative start as an interior monologue is provided, describing the sensation of sitting in the theatre and typical pre-show contemplations, from practical consideration of if we missed getting a program to larger concerns like ‘what if I don’t get it?’ Through this headphoned narration, along with live projection, we are taken to the Houdini’s final, October 1926 Detroit show. We are expecting acts of magic, escapism and hopefully his vanishing elephant illusion. So the card ticks and straightjacket escape that follow are almost disappointing.

But Houdini (a beguiling Toby Martin) is looking pale and lethargic, occasionally clutching at his sides as foreshadowing for those familiar with the circumstances of the entertainer’s death less than a week later. Indeed, the waters run black for the master of mystery, worsening as he prepares for his famous Water Torture Cell trick.

Are we about to witness Houdinin’s death and how does this make us feel? This is what “Spectate” is really about in its challenge of the nature of audience roles as spectators. In doing so the interdisciplinary work prompts audiences to think, but also to feel in response to the beauty crafted on stage in realisation of Writer/Director/AV Co-Designer Nathan Sibthorpe’s ambition to construct a world of contemporary illusion through use of 3D printed performers, live video compositing and immersive audio. The result is both fascinating and entertaining. The layered projections of diorama and live action are not only interesting in themselves, but accompanied by the prompt of the headphoned voice inside audience heads, they assist in suspending audience experience between layers of reality and versions of truth and fiction.

Narrative interjections occur also through cross to conversations with Sir Arthur Conan Doyle and alike as Houdini pursues debunking psychics and mediums as part of his desire, as President of the Society of American Magicians, to uphold professional standards and expose fraudulent artists. There is surprise too when audience members are texted in conversation with a show’s ‘character’ and also in a final cameo-filled short film that, although quite hilarious, appears unnecessary and out-of-context. 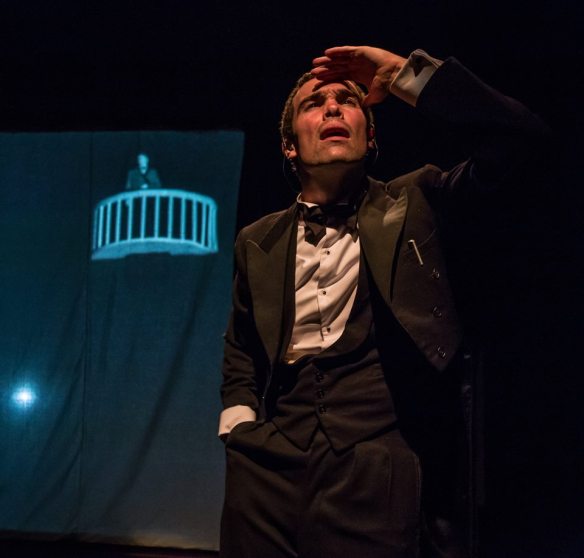 “Spectate” is a ground-breaking new production that engenders fascination both in experience itself and in recollection afterwards. While the immediacy given to an experience from a century ago is intriguing, its legacy comes courtesy of what it contemplates about audience membership. Even without a vanishing elephant, it is spectacularly clever on so many levels, in a way probably never seen before.