Craig Silvey’s novel may be called “Jasper Jones”, but in the Queensland Theatre restaging of the Melbourne Theatre Company production of the same name, the titular antihero barely appears during Act One. Still, he is an omnipresent personality in the story. In the fictitious, apparently insignificant, Western Australian town of Corrigan, news travels by gossip, if not the wireless. But the bookish Charlie Bucktin (Nicholas Denton) is usually too busy with his books to notice… until the hot summer 1965 night that Jasper (Shaka Cook) appears at his louvred sleepout window to enlist Charlie’s help after having found his girlfriend dead in the bush because he considers Charlie to be smart and ‘different to the others’. As the town’s mix-cast outsider, Jasper assumes he will be blamed for Laura’s death so teams up with Charlie to try and solve the mystery by investigating their suspect, Mad Jack Lionel (Queensland’s Hayden Spencer). 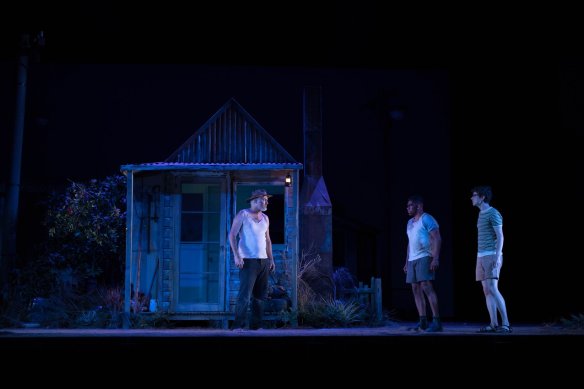 It’s easy to see why Silvey’s award-winning 2009 coming of age novel is a popular text choice for study in schools. Narrator and protagonist Charlie changes irrevocably over the story’s summer of secrets and lies. It is a tumultuous time of social upheaval and political drama with events unfolding against the backdrop of the time, including the Vietnam war, and closer to home too in Charlie’s fractured family; in her pastel twin set apparel, his cold and angry mother (Rachel Gordon) clearly does not belong in the town or probably with Charlie’s man of few words, but much wisdom, father (Ian Bliss).

Denton makes for an excellent Charlie, bringing energy and nuance to a performance that captures the awkwardness of his 13-year-old character in nervous, angular moments as he argues with his tempestuous mother, discovers a first love with Laura’s sister Eliza (Matilda Ridgway) and mucks about with his cricket-mad Vietnamese immigrant best friend Jeffrey (Hoa Xuande), eating watermelon and talking about Doug Walter’s test debut.

As a comparatively calm and courageous Jasper, capable of great love and loyalty in contrast to his terrible reputation as an unreliable thug, Cook leaves a lasting impression that has you longing to know what becomes of his character afterwards. And Duande is wonderful as Charlie’s loyal and very funny best friend, optimistic and determined despite having to deal with racism and discrimination from the townspeople, because his family is Vietnamese. 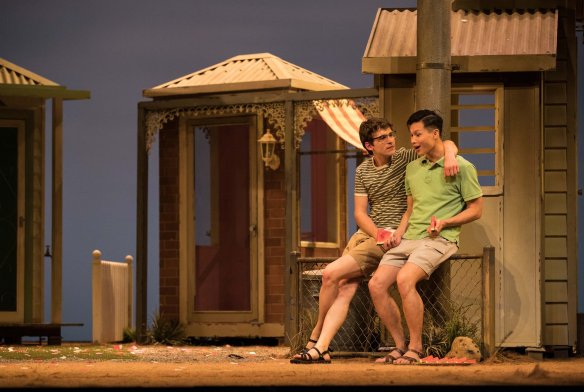 Staging effectively takes us to all of the novel’s key scenes predominantly due to a revolve stage (although this does result in some sight issues for end of row audiences seated in the stalls). Lighting crafts some beautiful silhouettes as the sun shades into evening behind the town’s telephone poles and alights its houses with glorious New Year’s Eve firework colours, in contrast to the eeriness it evokes when the boys are faced with Laura’s body hanging from Jasper’s tree by the water of the dam. A soundscape of bush noises also consistently contributes to the ample aesthetic and costumes work well in evocation of the era of Brylcreemed comb-overs and men’s matching cotton pyjama pieces. 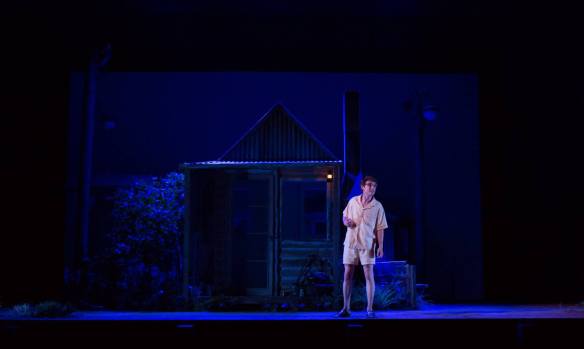 The show’s biggest strength, however, is its story. “Jasper Jones” is a gripping yarn made all the more engaging through its use of first person narration to capture the voice of the novel. And while its story is dark and gritty, this is tempered by the entertaining interplay of Charlie and Jeffrey’s natural relationship. The interaction between the two in peppered insults and meaningless banter about, for example, if Batman is superior to Superman (like Seinfeld’s George and Jerry’s repeated routine without George’s psychological problems), helps to bring about a balance to the drama that follows after Act One’s week in which ‘everything and nothing’ happens, when Jasper’s reappearance brings backstory as to his mother’s death and his neglectful, alcoholic father.

Whether in writing or on stage, audiences are drawn to Australian stories that reflect our experience of the world. As a modern Australian classic, “Jasper Jones” does this and more. Its exploration of social issues reveals a unique,  quintessentially Australian cultural character, while its chart of youthful rites of passage in a small country town brings about a universal appeal to a timeless tale that is only enhanced by every aspect of this stellar production.