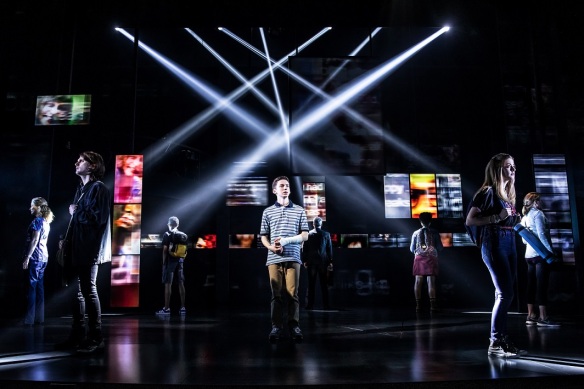 From before its beginning, audiences at “Dear Evan Hansen” see its 8-piece orchestra take their places in the upper level of David Korin’s simple but effective set. It’s an appropriate placement given the show’s award-winning, standout soundtrack and by the time we get to Evan’s (Andrew Barth Feldman) first solo, ‘For Forever’, it is easy to appreciate the show’s six Tony Award wins, including for Best Score and Best Musical.

This is “Dear Evan Hansen”, the contemporary Broadway stage musical with music and lyrics by Benji Pasek and Justin Paul, and book by Steven Levenson, that tells the story of neurotic misfit high schooler Evan Hansen, a shy and self-conscious loner who struggles with crippling social anxiety so is assigned by his therapist to write letters to himself (hence the title) about why each day will be good, one of which becomes the catalyst for the gripping story.

After, over the summer, Evan breaks his arm in fall from an orchard tree, his mum (Lisa Brescia) suggests that he get others at school to sign his cast. When, sadly nobody takes up the offer, Evan resigns himself to a life of being ignored, while secretly pining his unrequited, long-time love for Zoe (Gabrielle Carrubba), until Zoe’s troubled brother Connor (Alex Boniello) finds his ‘Dear Evan Hansen’ letter and things unfold from there in a surprisingly upbeat way, for while the score is filled with beautiful ballads like Evan’s ‘For Forever’, these are counter balanced with catchy numbers and many humourous moments, mostly arising from Evan’s social anxiety disorder awkwardness.

The humour comes despite the story’s dark themes for it is not long into Act One that Connor commits suicide, with Evan’s stolen letter to self still in his pocket, which everyone takes as a suicide note, assuming that he and Evan were actually friends. Empowered by suddenly finding himself noticed, Evan works with Jared (Sky Lakota-Lynch), the closest thing he has to a real-life friend, to make Connor into his best and dearest friend who ran to Evan when he fell and broke his arm. This also caters to the needs of Connor’s grieving parents Larry and Cynthia (Ivan Hernandex and Ann Sanders) who affectionately welcome Evan into their family with an attention that his busy single mother, working as a nurse’s aide while attending night school, is, despite her best attempts, unable to provide. As things snowball into the Connor Project social media movement, instigated by enthusiastic go-getter acquaintance Alana (Samantha Williams), Evan feels increasingly overwhelmed with guilt and doubt over his decisions.

Especially for such a small musical (with a cast of eight), “Dear Evan Hansen” has a huge heart. There is a deep humanity to its themes; this is a show about wanting to belong, with comments about difference, grief and acceptance. Indeed, the musical is moving in its subject matter but also incredibly hopeful in its ‘You will be Found’ (the show’s highly emotional Act One finale) sentiment. It is this combination that makes it a thing of both beauty and joy that will both break your heart and give you hope.

The show’s score is outstanding. From start to finish, the music is absolutely beautiful, but also its songs are incredibly catchy. The songs are storyline based, meaning that the insightful lyrics seamlessly merge with the dialogue, without becoming overly sentimental, yet they are also perfectly written to convey the emotions and lives of the characters. From fan favourite ‘Waving Through a Window’, in which Evan wonders if it is his destiny to be ignored and an outcast for the rest of his life, perfect in its every lyric and key change, to the upbeat ‘Sincerely Me’, in which ‘Evan’ and ‘Connor’ play out the fake, backdated email conversations of Jared’s playful imagining, the soundtrack is full of light and shade and a fine balance of tone.

The completely original story is also engaging thanks to the performances of its cast; experience of the show feels like observation of real people and relationships in a story also authenticated by its inclusion of a social media aspect. Especially noteworthy is Andrew Barth Feldman who is rarely off stage as Evan. His embodiment of the titular character is nuanced down to the cadence of his physicality in a manner akin to the character of Christopher Boone in “The Curious Incident of the Dog in the Night-Time”. His performance is choreographed to make his emotional discomfort evident even in the subtlety of physical and vocal tics. Indeed, it is astounding to consider that the role represents his Broadway debut. 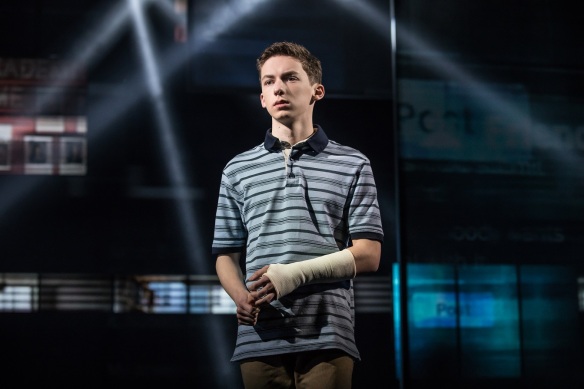 Musical theatre does not get any better than “Dear Evan Hansen”. Its legacy is so genuine that it is easy to appreciate the fandom community that has been built around the landmark musical and its experience ensures immediately subscription as a new admirer and addiction to repeat plays of its cast recording.